When you book with an account, you will be able to track your payment status, track the confirmation and you can also rate the tour after you finished the tour.
Sign Up

Or Continue As Guest

When you book with an account, you will be able to track your payment status, track the confirmation and you can also rate the tour after you finished the tour.
Sign Up
7463

The USS Arizona Memorial tour begins when we pick you up and our knowledgeable and friendly guide immerses you in the events leading up to December 7, 1941 when Japanese forces attacked the U.S. fleet stationed on Oahu. Once we arrive at Pearl Harbor Historic Sites, you’ll proceed to the USS Arizona Memorial, which commemorates the 1,177 seamen who were lost when their ship was hit and sank that infamous morning.

You’ll watch a moving 23-documentary with archival footage from the attack and then board a Navy vessel for a short ride out to the USS Arizona Memorial, the renowned white structure suspended over the remains of the sunken ship. Step into the Shrine Room where the names of those lost heroes are etched in marble. Look down in the water where oil droplets—“Black Tears”—from the sunken hull still rise to the harbor surface after almost 80 years.

Visit The Road to War and Attack galleries at the museum at the Pearl Harbor Visitor Center, which portray the attack through dramatic photography, memorabilia, and artifacts.

Take a step back in time at Pearl Harbor and you’ll take home an unforgettable memory of valor, sacrifice, and history. 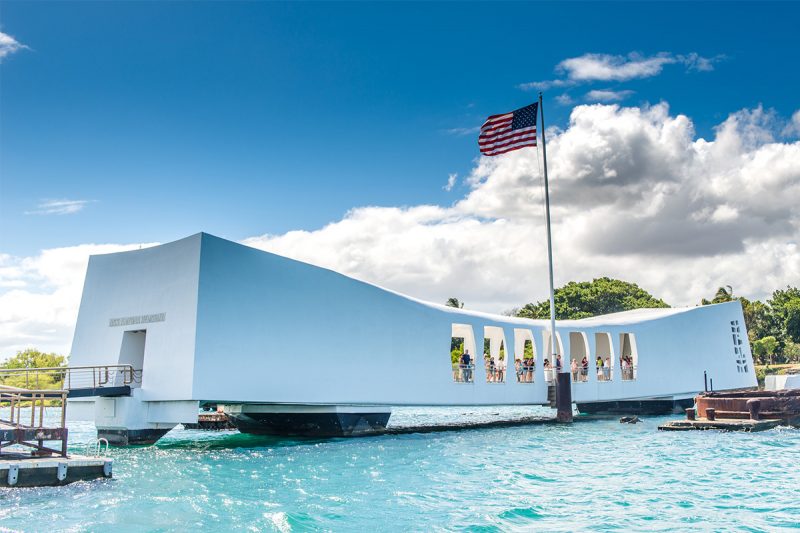 What You’ll Do At The Arizona Memorial
Upon arrival at the World War II Valor in the Pacific National Monument you’ll have a chance to explore the museum filled with historical artifacts and documents that further set the stage of the attack on Pearl Harbor.

The 23 min. documentary of the attack might be emotional to some visitors.There is a 10-15 minute Navy boat ride over to the Memorial. Subject to close for stormy weather. Should be able to walk 4 city blocks

this tour is a worthwhile experience, I recommend it!